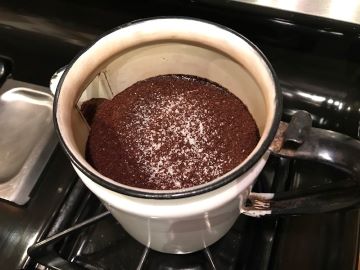 As the weather gets colder, I’m finding ways to cope. Baking is one of them, and I’ve leafed through cookbooks I haven’t opened in years to get ideas.

I’ve had the most fun so far with The Cowgirl’s Cookbook by Jill Charlotte Stanford.

Published in 2008 (and still available on multiple bookstore sites online), it’s a whimsical combination of recipes, cooking tips and lore about real-life cowgirls and ranch cooks.

And on page 88, I found the how-to steps for Campfire Coffee.

Let’s just say it was a hallelujah moment.

You see, this summer, my ranching relatives sent me my great-grandparents’ enamelware coffee pot from the 1920s. I was thrilled to receive it but had no intention of making coffee in it. I figured maybe I’d use it to water plants? Or as a vase?

The morning I chose to make Campfire Coffee for the first time, it was 18 degrees in my Boise backyard – and with no caffeine in my system yet, I wasn’t about to go out and build a fire in the fire pit. So, tenderfoot that I am, I brewed over the open flame…of my gas range.

Cold water, coffee grounds and salt – yes, salt; don’t ask me why – went into the pot. When it boiled, I took it off the flame and tossed in broken pieces of eggshell, which handily settled the grounds to the bottom of the pot like some kind of magic.

I poured the steaming coffee into my Great-Grandpa Jim’s sturdy stoneware mug, which I also am proud to own, and took a sip. It was stronger than my conventional coffeemaker brew, but also smoother somehow. It was delicious.

I drank so much coffee, I was a little jittery ‘til late afternoon.

The last line of the recipe presented another challenge: “Bury the grounds under a tree later.”

And so, to complete the adventure, I did.