Cuddling with a Coworker 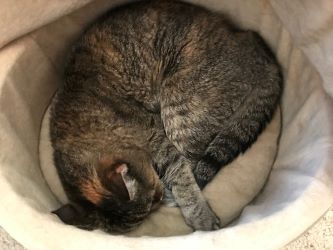 In my office, cuddling a coworker is a daily necessity, so National Cat Day will be just like any other.

I’ve blogged before about Jinx, whose personality far outweighs her five-pound frame. Now at 17, she’s in her mid-80s in cat years and time is taking its toll. Her once sleek, super-soft coat looks haggard no matter how much I brush it, and those bright turquoise eyes are cloudy.

Jinx lost her sight almost a year ago, and takes medication for blood pressure, kidney and thyroid issues without a fuss. As seen here, she sleeps contentedly in a heated pet bed in my office most of the day. We go out for “recess” to wander around the yard as weather permits, which she thoroughly enjoys.

From midnight to 6 a.m., however, it’s a different story. Jinx roams the house at night, howling at the top of her lungs every hour or two.

She doesn’t seem to be in pain – just disoriented and ticked off that nobody’s hanging out with her. I’ve dubbed it “Kitty-heimer’s,” as it reminds me of my mom’s slow decline into Alzheimer’s disease, but there's a name for it: feline cognitive dysfunction (FCD).

We've tried melatonin, pain medication, CBD oil; tried leaving a radio or TV on, keeping her awake in the evenings. Nothing works so far. It’s me who’s done the adjusting: earplugs, a closed door, a white noise machine, and an occasional pet-sitter who sleeps like a rock, so I can travel.

Recently, I had a veterinarian come by for an end-of-life consultation. I filled out an extensive survey about Jinx’s quality of life – a score of 180 or higher would indicate she’s nearing death and/or the time to start thinking about it.

So, we’re in a kind of limbo, Jinx and I. Knowing that this tough but precious time for both of us won’t last forever, I chat with her constantly and cuddle her between calls, meetings and deadlines.