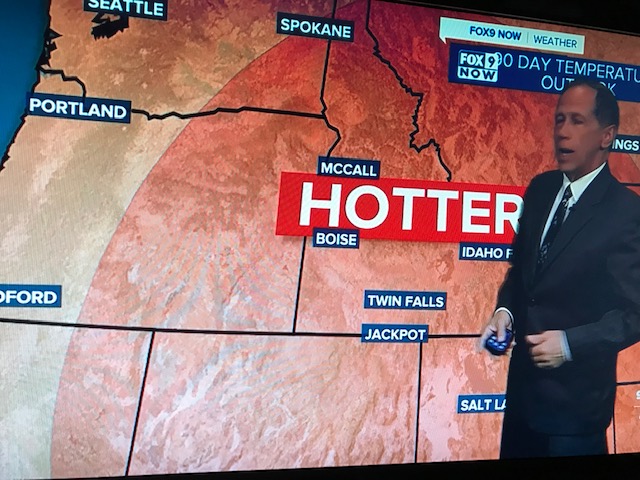 According to the National Weather Service, Boise has had only three nine-day periods of consecutive 100-degree or hotter days. (All have been since 2003.)

This is Day Eight of what appears to be the next record-book entry.

I venture outside in the early morning to tend the sagging potted plants, and sometimes talk myself into weeding for a half-hour or so. Then, it’s back indoors. It’s like the pandemic lockdown all over again, only with air conditioning and enough toilet paper.

What would normally be a bumper crop of July raspberries has been hammered. They look more like fruit leather, hanging from limp canes. I pick ‘em anyway.

I’m not sure what’s more depressing – the prospect of the next water bill, or the fact that the lawn looks pathetic despite herculean efforts. I’m about to take the expert advice in writer Tik Root’s recent Washington Post article and rip it out altogether – or at least half of it.

Heat is only part of the problem. We’re starting to see (and smell) the smoke from wildfires burning in northern California.

I’m a little surprised at my heat frustration – after all, I lived more than half my life in Texas, where toasty summers were taken in stride. When it got hot, I got organized: Out the door to run errands by 8 a.m., keep a cooler in the car with ice packs for transporting perishables from the grocery store, home by 11 a.m. before the temps soared.

I was grousing about the hot weather in a Zoom meeting last week when a coworker who lives in Phoenix, Ariz., reminded me it was 114 degrees there.

So, when I got into the car later that day to discover my bottle of hand sanitizer had melted into a peculiar shape, I had to laugh…and then crank up the A.C. It could be worse, right?