June: What’s Blooming in the Office? 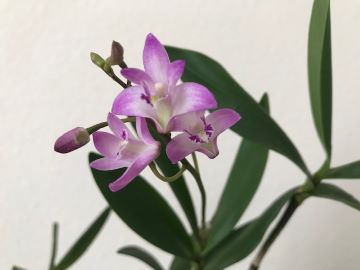 This orchid is in quarantine, on a separate windowsill far from the others, as it recovers from an aphid infestation. But that hasn’t stopped it from making the best of a bad situation.

It’s a hardy little plant, and a good choice for beginning orchid-lovers. Each flower is no bigger than my thumbnail with a strong, perfume-like scent.

I know its official name as Dendrobium kingianum, but apparently I’ve been out of the loop – according to the Australian National Herbarium, it’s been renamed Thelychiton kingianus.

Either way, the “king” is a nod to Philip Parker King, a British naval officer and early explorer of Australia in the 1800s.

It grows wild in Australia, where it is known as the Pink Rock Orchid, popping up on and between rocks. I’ve got mine planted in a mixture of bark and pebbles.

I water this lovely orchid once a week, fertilize about once a month, and keep it in filtered sunlight – it could even live outdoors much of the year, but I'd need to mist it regularly to add humidity.

The Pink Rock Orchid typically blooms in the winter or early spring in this hemisphere, so mine is late this year. Better late than never!