For the Man Who Moves the Mail 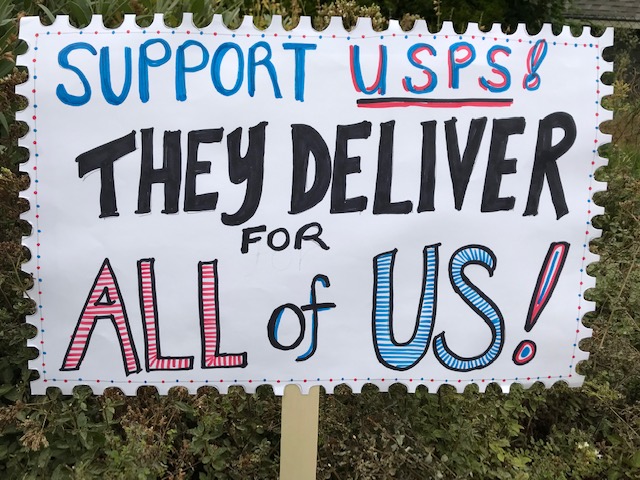 I made a placard this evening, in anticipation of attending the second demonstration of my life as a participant instead of a journalist. It’s this Sat., Aug. 22, in support of the U.S. Postal Service.

Nobody I know works harder than my brother Dave. Over the years, I’ve gotten glimpses of his job behind the scenes at a local post office, where he sorts packages by the thousands.

I’m astonished at how much work it is – and it never ends. Truckload upon truckload, incoming and outgoing, every box, bag and padded envelope must be organized by ZIP Code and route number.

Dave’s always worn heavy gloves, but now he dons a mask, too – a policy he says has been as divisive at his workplace as anywhere else. His back aches and his knees are shot. He has ongoing sinus issues from breathing in so much dust. He and his wife, also a USPS employee, haven’t had the same days off in years – they don’t have enough seniority to ask.

And yet, Dave isn’t a complainer. “This job has allowed me to do the things I want when I’m not at work,” he told me once with a shrug. He’s an amazing drummer and music producer: “I can pursue my music, take a vacation once in a while, save some money,” he said.

I figured with everyone ordering so much online, the U.S. Postal Service would surely be able to dig its way out of its financial hole. But, as in so many American households, that doesn’t seem possible without more federal assistance.

It also doesn’t seem possible that mail delivery would be intentionally slowed – or that the entire system would be dismantled and privatized, which seems to be the ultimate goal of some in the business world.

I’m certain the U.S. Postal Service could be improved. Standing in line for counter service is an experience that feels like a throwback to the 1950s. But it’s a true American institution. It deserves our respect and support.