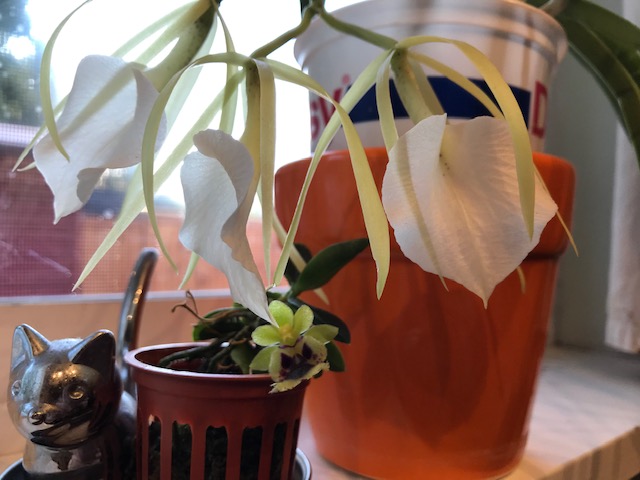 If you visit this sporadic (but sincere) blog regularly, you may recognize the orchids in the photo.

I first wrote about the tiny Haraella Retrocalla in Dec. 2018. It’s a living contradiction to the rest of 2020, blooming three times so far this year. I love this plant!

This is my first mention of the white Brassavola Nodosa, but its cousin was featured almost exactly a year ago. Compare the photos – the similarities and differences between the flowers really are interesting.

What these orchids have in common is, they’re not in my office anymore. I put them on a kitchen windowsill this summer so I could keep a closer eye on them, although for different reasons.

The Haraella is a miniature orchid, so it dries out quickly and needs more than my typical weekly watering. Positioning it above the kitchen sink is a daily reminder, and has made for a healthier plant.

The Brassavola is growing in water instead of bark, something I’m trying with a half-dozen orchids that otherwise probably would be in the orchid graveyard by now.

When a plant looks healthy but its root system is small and spindly, I try putting some rooting hormones on it, then plopping it into a jar or cup of water to see if I can revive it.

I’m not especially familiar with hydroponics, the art and science of growing plants in water, but I'm intrigued. It doesn’t always work for me, but some Treasure Valley Orchid Society members swear by this method.

I've also gleaned a few tips from the website gardeningknowhow.com.

Speaking of the orchid club, we had our first virtual meeting last month. The group was small, but being online allowed everyone to show off our blooming plants without the hassle of transporting them. Still, it just isn’t the same as getting together in person.