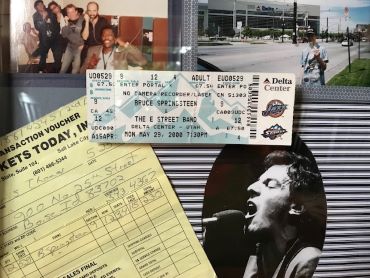 It’s a very special anniversary. Twenty years ago today, my son was baptized into the Church of Rock ‘n Roll.

Adam was almost 14 and had never been to a rock concert.

“We’re starting at the top,” I told him.

I bought tickets by mail from a scalper to see Bruce Springsteen and the E Street Band in Salt Lake City, the closest show to Boise.

At $115 apiece, the price was a breathtaking splurge for a single mom on a tight budget, plus a room at a hotel near the Delta Center.

We drove the six hours from Boise to Salt Lake, blasting Springsteen CDs all the way. Adam was accustomed to that part, since ol’ Mom had been a fan since first seeing The Boss in the 1970s. It was a great way to set the tone for an unforgettable night.

I’ve been to many Springsteen concerts over the years, and was even lucky enough to spend some backstage time with the band at one point in my life. But this was the best by far – introducing a young fan to the energy, angst and vitality of rock ‘n roll at its best.

The photo with this blog post is a shadowbox montage of concert memorabilia from that show and a couple others I attended. I made it for Adam for his birthday last year.

Today, he has wide-ranging musical tastes and I always look forward to his recommendations of new bands or singers to add to my playlist.

He reminds me regularly, however, that we are both still Born to Run.