March: What's Blooming in the Office? 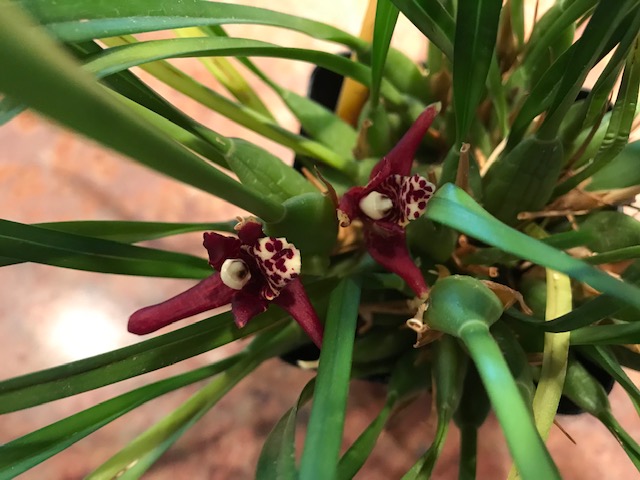 Meet Mighty Max, my nickname for Maxillaria tenuifolia. He’s blooming right on time, as this orchid species produces flowers in March and April.

The coolest thing about Max is, the flowers smell like coconut! They’re a little difficult to get to, as they’re tucked into the plant and poking one’s nose into its long, grassy foliage isn’t easy. But the sweet aroma is unusual – and unexpected, if you’ve never heard of the “Coconut Orchid.” Imagine the surprise of the first orchid hunter to find one, in the 1830s, near Veracruz, Mexico.

Some folks think it smells like a Pina Colada.

Max. tenuifolia is one of the more common Maxillarias; there are hundreds. It is a native of Central and South America. It loves warm temperatures and needs lots of light to produce flowers. I feel certain Mighty Max only came through for me this year because I put him under some grow-lights once in a while, to help counteract the gray Idaho winter.

The name is based on the Latin word for “jawbone,” since the lip of the flower reportedly looks like an insect’s jaws. (I feel fortunate for never having looked that closely at insects’ jaws.)

These are not considered difficult to grow and, unlike some orchid species, they’re nice-looking plants even when they aren’t in bloom. One key to happy Maxillaria is letting them dry out between watering.

You should be able to find them soon in the Boise area at the Treasure Valley Orchid Society’s annual show and sale, coming up April 13-14. You can also order them online.