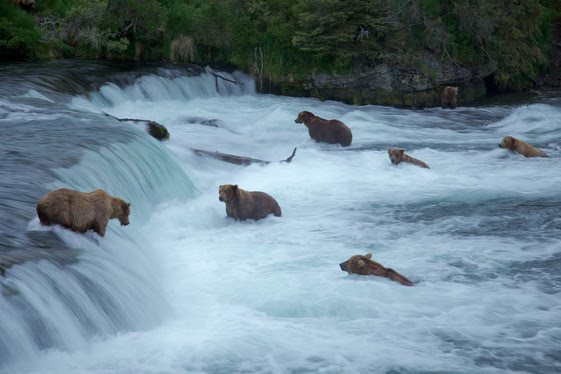 One of the running jokes my son and I had when he was growing up in Idaho was that every morning, at least one front-page newspaper headline always involved wildlife. Never a slow news day in the Gem State..!

Generally, this is still the case. Today it happens to be, “Help steelhead survive by unhooking them while they’re still in the water.” Will make a note of that. And there's a bonus article on how to avoid (and ugh, remove) ticks.

I often wonder if he thinks of this now, living in New York City, a world away and surrounded by wilderness of an entirely different sort.

So, for Adam – it’s his birthday today – and others stuck in the city, here’s a surefire way to forget the urban grind for just a few minutes.

As the U.S. Interior Department puts it, “Explore.org's #BearCam gives you a front row seat as brown bears fight for prime spots to feast on the largest sockeye salmon run in the world at Katmai National Park (in Alaska). The salmon are jumping and the bears are hungry, so check it out now to see all the fun!”

What more can I add? I have a long to-do list today, but I found myself mesmerized by the bears this morning, watching for a half-hour over my morning coffee. Just the sound of the rushing river is relaxing.

I can’t decide whether to root for the bears or the salmon.