October: What’s Blooming in the Office? 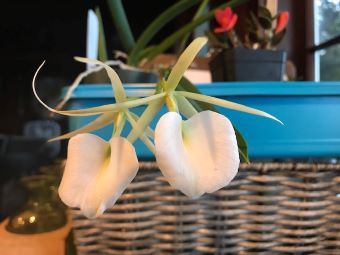 The Brassavola orchid typically blooms in spring or summer, but mine didn’t get the memo.

Its flowers burst open in early September and haven’t quit! They have a light, citrusy fragrance that peaks in the evening, which is why this orchid genus is sometimes referred to as the “lady of the night.”

Brassavola is named after an Italian doctor who lived five centuries ago and distinguished himself not only for his skills as a botanist, but for performing the first tracheotomy. How’s that for a diverse legacy?

According to the American Orchid Society, growers often use Brassavola orchids to hybridize with others. Mine is a cross between the fairly common B. nodosa and another Brassavola known as “Mas Mejor” – which, in Spanish, means “much better.” Indeed!

These plants love bright (but indirect) light and warm temperatures, and it’s important to let them dry out between watering.

Despite being fairly easy to grow, they are surprisingly hard to find in stores, so your best bet to purchase one is online.