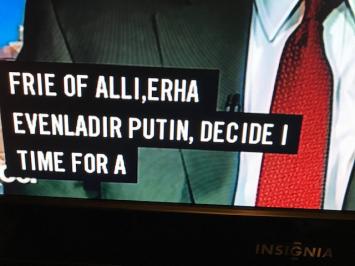 My longtime significant other has had a major hearing loss since birth. For me, it’s been one eye-opening lesson after another watching him navigate areas of life that most people take for granted.

You don’t realize how frustrating noisy restaurants, group conversations or movies without subtitles can be until you’ve experienced them with someone deaf or hard of hearing.

One of our pet peeves is the closed captioning on television programs. As this week’s Iran crisis unfolded, it would have been great to read even one sentence that hadn’t been garbled.

As a writer and editor, I find them especially difficult to watch. It’s easy to figure out which programs use voice-recognition systems (they’re the worst) versus human transcriptionists (lots of typos, but closer to accuracy).

The Federal Communications Commission supposedly regulates TV closed captioning, but you’d never know it. For instance, the FCC says captions “should not block other important visual content on the screen, overlap one another or run off the edge of the video screen.” We see that rule violated on a daily basis.

The National Association of the Deaf calls the FCC rule for live programming “one of the most troublesome” of the closed-captioning rules. I understand the challenges of captioning a live conversation, but with all the technology out there, it's sad that most of the results are still amateurish.

The captions are so bad that they’re sometimes hilarious, but more often annoying. And when you think about it, they aren’t there for our amusement. According to the Hearing Loss Association of America, one in five Americans reports some degree of hearing loss. They need news, information and entertainment as much as anyone else.

Is anybody out there listening?