The World in a Shoebox 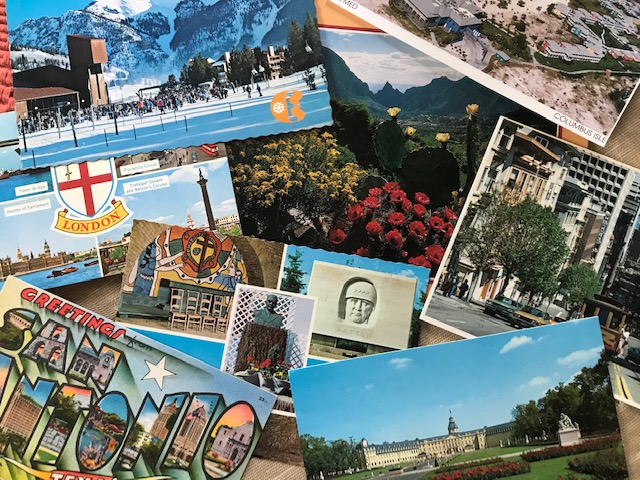 Friends who are frequent travelers are having a tough time with the pandemic. They’re so tempted by low airfares, and the rare prospects of uncrowded airports and having elbow room on planes, which they weigh anxiously against the health risks associated with flying.

I’ve been content so far to stick close to home. Then again, I can travel the world by opening a couple of shoeboxes.

Postcards seem like an awfully old-fashioned way to communicate, and that’s exactly why I think they’re charming. Past generations of my family apparently thought so, too, as over the years I’ve accumulated a postcard collection dating back about a century.

Some are unbelievably kitschy; others are beautiful. It’s also fun to see how cars and clothing styles have changed in the ones that are photographs.

As a military family, we moved a lot and my folks often bought postcards in addition to taking photos. It’s been fun to recall our trips, especially during our three years in Europe – from London’s fashionable Carnaby Street in the 1970s to Bastogne, and German castles to the Eiffel Tower.

When my siblings and I left home, my mom kept all the postcards we sent over the years, which bring back memories of vacations and even a few job-hunting trips.

I also ended up with postcards from my mom’s side of the family, going back to great-great aunts and uncles. I have a couple from France that are hand-embroidered.

Unfortunately, not everyone in the family inherited the writer’s gene. From one of my great-uncles to his mom, on a postcard that shows a cruise ship: “We are now in the Bahama Islands vacationing. This is our ship.”

Then again, there are real delights. On a postcard of Reno, sent to my dad’s parents: “We were married at 2 this afternoon. Chris started off married life by hitting a jackpot in Harrah’s Club! Will call you Sunday night. Love, Mr. & Mrs. Dave Thomas.”

I’ve never thought of myself as a deltiologist (look it up!), and I don’t intend to sell my stash. But if you’re interested in the value of old postcards, there’s lots of info online. A good place to start is Ephemera Corner, which has ideas for using and preserving old postcards, and determining their value.